skip to main | skip to sidebar

Anyway- Gillian is such a ball of energy, chin wagging was at warp speed, news exchanges, ideas swirling around, stories of this that and the other.... where have you been, what do you see, where are you planning to go next.
Our boys eyes were popping over dinner, listening to Luke- he is an avid traveller and been to so many places, well informed too, so lots to tell us. He has been to far east Russia, you know where it almost touches Alaska!! First person I have met who has done that, and he hung out with guys that were surfing!!!

Beware icebergs not good for your health, lets hit the waves type surfing. Who would have thought it? 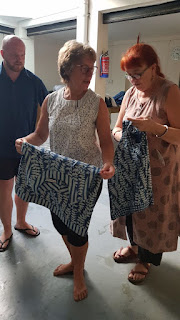 Neither of us are good at standing still for photos, so here are some action shots as we muddle around.
She got to check out the new block rooms and have a fiddle, raid fabric stashes.... all the things a textile-a-holic does when you have a workshop like ours 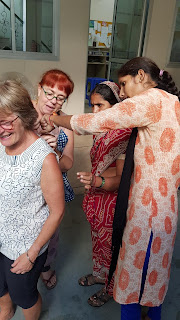 I did start out wanting to talk about Fair Trade and Social Enterprise,
we just had a short break in Hyderabad, any excuse to check out a new place.... the first draw card was our mate Lena was going to be the as part of the International Basic Income Conference. This was a think tank type event- working to lobby governments and concerned bodies on the benefits to people and hence their home country if governments work to ensure everyone gets a reasonable bite of the apple.
If people have a basic income assured, they will have better health, kids will go to school, families generally more stable. As a citizen there is more chance of them engaging in the community positively, ...food, education, stability more chance of better job and paying taxes which helps a country progress.

No brainer really but poverty is on the increase and the gap between HAVE and HAVE NOT wider
Praveen is a Delhi boy, India has a lot of poverty, he was ssssooooo shocked on our first visit to Paris to see street people, and then in Sydney as well. Understandable in India, maybe but in affluent countries WHY?

That got me onto thinking.... I remember when my friend Anita of Conserve India, a project to help reduce waste and create jobs for urban poor first heard the label social enterprise applied to her work. It was a new term, yes it did apply to her work although she started out simply trying to do the right thing and letting her conscience guide her.

Why if I work in Australia as a teacher for example-  I am worth enough to have a house and car, feed my kids, electricity, running water, health care but if I worked here in India in a government school [and by and large they pay more than the millions of small private schools] my 'house' would be one large room, water might come for an hour once a day or I have to go to the pump for it, electricity may or may not run and is super expensive, car forget it,.... just a rough example.

In 2004 I heard about Barefoot College and I was onto Praveen, I want to go there and meet these people.
He asked me to explain what they were all about, then he said categorically NOTHING like that existed in India, it was only a story to swindle money from foreigners. He worked in travel and had seen lots of scams.
I was insistent, so we went to visit. He was just the driver and I was the giddy tourist.
Well, did his eyes OPEN
he sat under the tree and had a cup of tea, asked the kitchen guy, how does it all work, where does he get a cut for bringing a client? and the guy explained to him what they do and how they work, really
When I came back, he was transformed. They look after people, they train the poor, they help people with advocacy. Wow it is true, it is real.
It was a turning point for him.
We were already working on the idea of tours..... we wanted it to be real. Meet people, meet good organizations, connect up truthfully.
It took a lot of work.... there are so many less than wonderful scams running [less now I think, as India is not so much downtrodden in poverty as it was. Still a long, long way to go but small in roads happening]

So from that day, that is what we wanted to offer our guests. We did not understand exactly what it was, not a lot mentioned about Fair Trade or Social Enterprise in those days ... but we have lived and learned and love what is does for people.

This is on our website
We support Fair Trade and Self-Help organizations where we can and so the only ‘shops’ listed on our itinerary come under this category.
Don't worry there are also lots of other markets and bazaars we can visit too!
The same for our hotels- we try to find family run ventures rather than large chain groups that meet our standards of comfort and local character- some places are rather flash, some simple home-stays; all are the best locally for food and friendly service.

Home base is just outside Pushkar, where we pursue a Fair Trade
Textile Social Enterprise- take a look
http://www.the-sitching-project.com/ 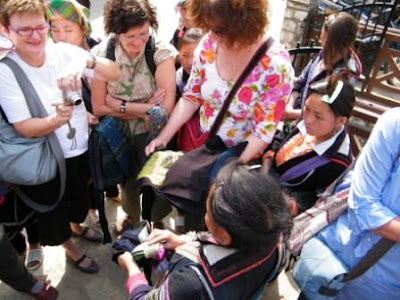 This is a long time ago with one of our Vietnam Groups.
I am sure this is the day
"Helping the local economy"
spouted for the first time, one of the girls said it and it became a catch phrase of the group.
I know it struck a note with me
and many of that group have travelled with us many times....
some how that phrase has joined our travels and many people say it.... I don't think I bring it up every time.
BUT
we do make choices with where we take our guests
we try very hard to have person to person/artisan/maker/ co-operative type contacts and workshops.
We try and find family run hotels where possible, not big chains.
So as much of the money we spend as possible goes into local communities not siphoned out as profit for those far away